Connect and share knowledge within a single location that is structured and easy to search.

Keeping the community safely in the clear for legal issues

This is a bit of a follow up from this Open Source meta post. You don't have to read it, though you can if you'd like some background - but everything is covered here as well. I also meant to write this up a long while back, but if you don't mind, I'll present my last year of school as an excuse :P

A long while back, there was a bit of talk over the use of acronym disclaimers (e.g. IANAL - I am not a lawyer) that were starting to gain momentum in numerous answers over the site. Some of them were acronyms, like the classic IANAL, or things that are more wordy such as in this post.

Open Source has a foundation on software licenses, and it involves a lot of law. We want everyone to feel safe and comfortable here, while making clear to people what the law is, and why they shouldn't use an answer as the basis for a big legal decision.

To quote Dale M in this Law Stack Exchange answer:

First, there is no presumption in any jurisdiction that I am aware of that anyone is or is not a lawyer (or doctor, or engineer etc.). If people knew that you were, however, then it is reasonable that they would give your statements more weight then if they did not know. It may also be reasonable if they suspected you were. The practical purpose of such a disclaimer is to ensure that they know you aren't.

The disclaimers that people use carry importance, and we're not attempting to dispute that. However, we were somewhat concerned with a few things:

We want to help.

So we're asking, what can we do to help solve all of this? Think of anything, be creative!

Do "IANAL" acronym-style disclaimers even do anything? Are they effective?

Meh, I'm not a lawyer so I can't evaluate this properly. Some material I've read suggests that the problem is not (solely) that people think you are a lawyer, but that even if they know you are not, providing legal advice is practicing law without a license. But in the spirit of not taking advice from armchair non-lawyers, we should probably ask Stack Exchange to provide us with some kind of recommendation here rather than trying to figure it out on our own.

Does the larger presence of acronyms in posts start to clutter them? [...] Will they be understood, and will they lower the quality of posts on the site?

Yes. Not by everyone. Yes.

Are people really concerned with themselves providing an answer, or someone else interpreting the answer as legal advice?

I just wanted to highlight this portion from Kevin's answer so others can upvote this suggestion specifically...

Add a banner, somewhere prominently visible to new and returning users, that reminds people not to take advice from random strangers on the internet in cases where they actually need that advice to be correct. The text of this banner should be drafted by real lawyers, not by us.

This is what they do at Law Stack Exchange, for example: 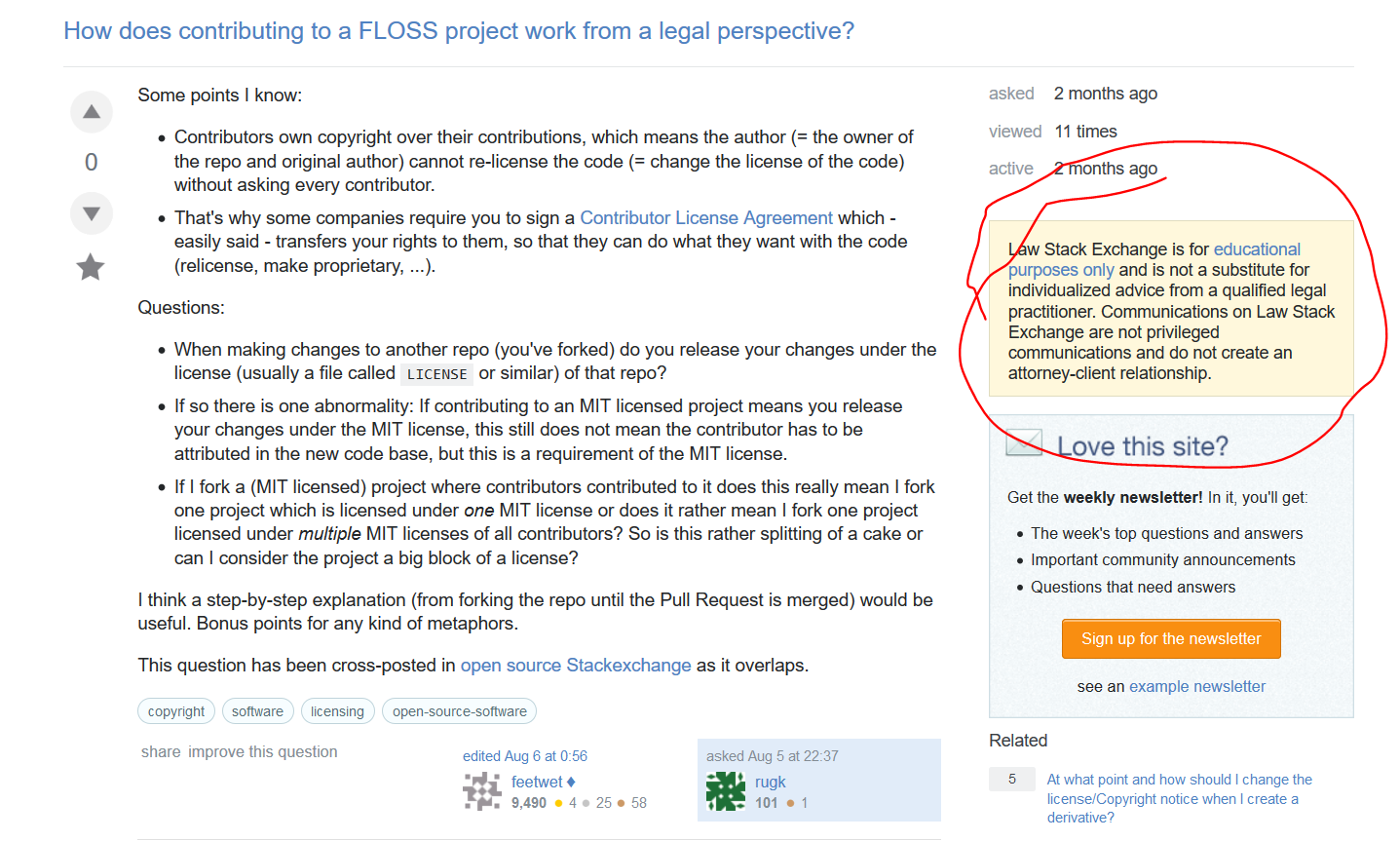 Do "IANAL" acronym-style disclaimers even do anything?

What is legal advice?

Examples that do not constitute actual legal advice:
...
- Responses to legal questions posted in online Q&A boards, even if provided by a licensed attorney

If that's true, then it seems like there is no legal reason for TINLA.

...there is no presumption in any jurisdiction that I am aware of that anyone is or is not a lawyer...

If that's true, then it seems like there is no legal reason for IANAL.

While it's considerate to anticipate someone making dangerous assumptions,
it seems cleaner and more efficient for the website to be informing readers.

You could have new users read something short and to the point that they need to acknowledge they have read. I would offer the following information:

For anyone not logged in you could show the information directly above the answer section.

I think that any disclaimer is not really needed but a site-level disclaimer would be ok.

Not the answer you're looking for? Browse other questions tagged discussion answer-quality .

Welcome!
This site is for discussion about Open Source Stack Exchange. You must have an account there to participate.
Help
Visit chat

8
What should our reference policy be?
3
What's the policy on editing "technical" terms?
4
How to discourage "chameleon questions"?
2
Legal principles and a generic 'XY' problem
10
The Quality Cleanup Initiative: Improving our quality
9
How frequently should I say "I am not a lawyer"?
1
IANAL/TINLA - you what? Let's de-acronymize ourselves